I do like to do lists at this time of year to talk about the best stories that have been told to me, through the media of film, television or print this year.

First up, its movies! I don't rank my movies because it was hard enough picking just 5 let alone putting them into some kind of logical order.

Okay, I may have lied about being able to make a logical dissention between my favourite and least favourite movies. Let's just call this one no.1 and everyone else the runners up. Hands down this was the best movie that I saw in 2014. Possibly the best movie I've seen in a very long time. I went with friends and we spent the entire walk back to my flat in silence because we didn't really know what to say. Even after a cup of tea to restore us we found it difficult to talk. It's such a powerful movie. It portrays such a powerful picture of Autism for a start (Alan Turing would, by today's standards, have been put somewhere on the Autistic Spectrum based on accounts of his personality.) and also the ending is crushing as to the treatment of homosexual's. This man and his team effectively ended the war early, yet none of this mattered in the face of his 'perversion'. The last 10 minutes of the film is so heart-breaking. Without doubt the most powerful piece of film I've seen in a long time.

Guardians of the Galaxy

This movie was such fun. I laughed so much, and cried on one occasion. If you've seen it you'll know what occasion that was, or at least can guess. This movie has a lot of kick ass action and a female character that is not - thank god - just a romantic interest for the male lead. It's ridiculous at times and outrageous at others, but it's definitely one that I would go back and watch time and time again. I'm already looking forward to the sequel.

The Fault In Our Stars

And the prize for the movie that made me cry the most this year goes to, The Fault In Our Stars. Not even Les Miserables could match up to the amount of water that left my eyes in that cinema. I'm kind of glad I went on my own.

The real strength of this movie I felt was the message that it left, about how Gus wanted to leave a lasting impression on the world, but what was more important was the way he touched the lives of his close friends and family. When compared to the book (baring in mind that it has been some time since reading TFIOS) I felt that the movie brought this message across much better, but a re-read may change my mind.

I have a lot of trouble saying that I 'enjoy' the Hunger Games series. The films are, yes, extremely good and getting better with each film. But the subject matter is horrifying, and getting more so. Jennifer Lawrence is an absolute gem in this, and her portrayal of PTSD and her slowly descending into worse and worse appearance of PTSD is very convincing. There are so many parts of the movie where I catch myself wincing at the screen because there's something there, with all the 'propaganda' that feels terribly familiar and not impossible in the future. Also, Josh Hutcherson deserves some recognition for his fabulous work. I won’t spoil it in case you haven’t seen it but he really comes into his own as an actor in this instalment. I can’t wait to see what he and Jen do in the final part.

How To Train Your Dragon 2

This is a truly beautifully animated film. I love these stories to death. They’re so touching. I also love all the characters. Toothless is a given as he reminds me of my cat. For being an ‘animated’ film, the portrayal of relationships is really pretty good. Hiccup and Astrid have a wonderful chemistry, and how they showed Hiccup’s parents brought a few tears to my eyes. The story was also very well told. I was concerned where they were going to go from the first film, but they still managed to have a very meaningful plot that was well executed. Again, looking forward to the next one. If the school where I worked wasn’t so strict about not letting them watch films on the last days of term then I would insist on them all watching this, just so that I could watch it more!

What I've been reading August - December

*Blows off the dust*

It's been a while I know. And I even dabbled with another blog. I promise I won't do that again.

Turns out this actual adult thing takes up more of my time than I had originally thought. Quick update. I'm now an actual proper fully qualified teacher of science. I've moved 400 hundred miles from my home in Northern Ireland to take up a job in England. I've been teaching for almost a full term and I am exhausted.

Keeping up with reading and writing isn't easy when you're a full time teacher. "But don't teachers get to leave school at 3pm?"
HAHAHAHAHAHAHA. No. And even if I do it just means bringing work to do it at home instead.

But yes. Reading. I haven't read that much from August to December, and this is the first year that I don't thnk I'm going to complete my reading challenge. But never the less, let's get started!

This is actually my first graphic novel. And it's amazing. I bought the first volume on a trip into London and had it finished by the time the train pulled into my station and promptly ordered Vol 2 and 3. It's a wonderful Sci-Fi, Couple from opposite sides in a war, kick ass story. The humour is also something that tickles me. I really can't wait until Vol 4 is released, but it keeps being pushed back as Amazon keeps e-mailing me as much.

2. Republic of Thieves (Gentlemen Bastards no. 3) by Scott Lynch

I love this world to death. The Gentlemen Bastards series is utterly amazing. I listen to it on audiobook as I find it easier to follow fantasy if I have someone reading out all the strange place names and character names to me as I tend to forget when I've read the names before and then lose track of who's who if I do it by myself. Mostly I was listening to it on the way to work and on more than one occassion I nearly crashed my car from laughing. Scott has an amazing whit that is passed on through Jean and Locke. This book also feathers the elusive Sabatha who's been a hot topic of book 1 and 2 and it was amazing to get to know her as well. The ending totally dropped a bomb on me and I'm dying for part 4.

I love Ken Follets 'epic' writings. My favourite duology is the Kingsbridge series Pillars of the Earth and World Without End. He's so good at creating huge overarching stories with interlinking themes and characters. However, Edge of Eternity fell a bit flat for me. It wasn't nearly as good as the previous two books Fall of Giants and Winter of the World. The main problem is that I think it covered too many years. However, it was nice to see how the 3rd generation characters of the protagonists of the 1st book Fall of Giants ended up. The series as a whole also shows how much of an extrodinary century the 20th century was. 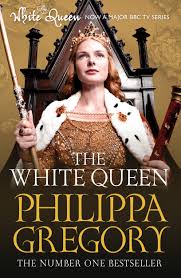 I do enjoy historica fiction and I've found online that Philippa Gregory is very much a marmite author of the book community. What made me buy this series was the BBC TV show that aired in 2013. I am a sucker for Historical dramas. The older the better. The costumes and the dashing men and fierce women draw me in. The series was so powerful I had to get my hands on the source material to compare. I've only read 1 out of the 6 books currently in the Cousins' War series. Although this was the first published, it's not the first chronologically. Though I'm under the impression that you can read them in any order. They do follow the same story but from such vastly differing points of view that it doesn't matter whose side of the story you hear first. I found myself getting very wrapped up in the first 2/3rds of the story quite nicely, but after Elizabeth and her children go into santuary and the infamous 'Princes in the tower' storyline takes over I found this book dragged it's heels a lot. Perhaps its an analogy for how long Elizabeth didn't know what was happening to her sons, but I felt that it lost pace quite dramatically at that point. Otherwise, a very good and interesting read. I will doubtless be making my way through the others in due course.

I don't really want to say too much about this book other than it's a dream to read. Not for younger readers. If you like graphic novels, humour, good twists, and are not too put off by sex (I'd say that it's tastefully done for the most part) then this is definatly worth picking up.

Have you read any of these? What did you think?

Let me know what you've been up to as well. I've been away so long, that I know some of you are bound to have news for me!